Sexual Harassment and Discrimination in the Workplace

Employees (and all UK citizens) are protected from all forms of discrimination under the UK Equality Act 2010. The Act also protects them from sexual harassment, with the Act broadly describing harassment as a person engaging in unwanted conduct related to a person’s protected characteristics or where the unwanted conduct is of a sexual nature.

However, the growing #MeToo movement is perhaps seeing more and more people, not just women, becoming increasingly aware of their rights, and not being afraid to use them or at least cite them in complaints. Calls are being made for more to be done to legislate in this area, when in reality the legislation already exists, and so this is more a matter of people choosing not to do the right thing, rather than the law failing to tell them what they are doing is wrong.

So why do people do or say the wrong thing?

In some situations, it is undoubtedly due to a desire to create or instil fear in another person, or to control or belittle people. However, in the vast majority of instances, it is through blissful ignorance, or arrogance, assuming what you find funny will be found funny by others, or that others don’t mind the playful teasing, which is after all, just work place banter, right? Wrong!

We should never assume that what we find funny or class as banter will be taken in the same way by others. Often, we hear the saying “treat others like you would like to be treated yourself” which is a good start, but in reality, we should be aiming to treat others how they want to be treated, which is undoubtedly with respect and dignity.

In addition, we in the UK (at last) are starting to directly address the stigma behind mental health and wellbeing, and of course two workplace causes of mental health issues can be discrimination and sexual harassment, or at least the perception of such, based maybe on some thoughtless comments or actions of a colleague or manager.

Appropriately, these views are shared by the FCA, who in a letter from October 2018 to the House of Commons’ Women and Equalities Committee advised that when assessing a firm’s culture, the FCA take into account non-financial conduct as well as financial, in particular sexual harassment. The FCA are clear that they believe that culture is key cause of major conduct failings and that they would see a culture where sexual harassment was tolerated as being indicative of an overall culture which does not allow for decisions to be challenged, and would therefore fall far short of the regulatory expectations of a firm’s culture.

The FCA believe that a firm’s culture is shaped by a number of factors which include remuneration, inclusion and diversity. As culture is shaped by conduct and conduct falls within the realms of the Senior Managers and Certification regime (SMCR) it is clear that the FCA sees sexual harassment as coming under its regulatory ambit.

So, with legislators and regulators behind the movement to eliminate sexual harassment and discrimination, firms of all size and nature surely must now take the initiative to play their part and educate their staff on what is right and wrong, acceptable and unacceptable and when to speak out!

Training and education of this nature, where it exists, is usually carried out via an e-learning course. However, one of the problems that is always cited by learners is that e-learning training is too long, boring and unengaging and that it is just like reading some power point slides.

Whether fair or not, if this is the learner’s perspective, then the training will be ineffective and creates a worrying position for employers as they can never be truly sure that the message of any training has been delivered, understood and taken back to the work place for implementation.

However, recently I was introduced to some new, innovative and exciting training in anti-discrimination and sexual harassment at work. The training uses real live actors, filmed in real life environments and situations, and is mixed with interactive learning modules to really bring the topic to life and feedback from some existing customers is amazing, with firms saying that their staff are actually asking for more!!!

Traliant’s Preventing Discrimination and Harassment course trains employees on how to recognise and respond to situations that can lead to discrimination or sexual harassment – from the obvious to the subtle and is one of the most effective ways to foster a positive, respectful workplace. This training is available in versions for employees (30 min long) and managers (45 min long), in both online and instructor-led/classroom formats. The training can be customized with your own policies and branding and is available in multiple languages (if required) and as it is mobile-optimized training, learners can access it on any device, anytime and anywhere.

There are additional courses with more in-depth training on the following subjects also available:

So, other than sleepless nights, what have you got to lose, clink on the link below for further information:

For more information about the training that MSA can provide in conjunction with Traliant please click below: 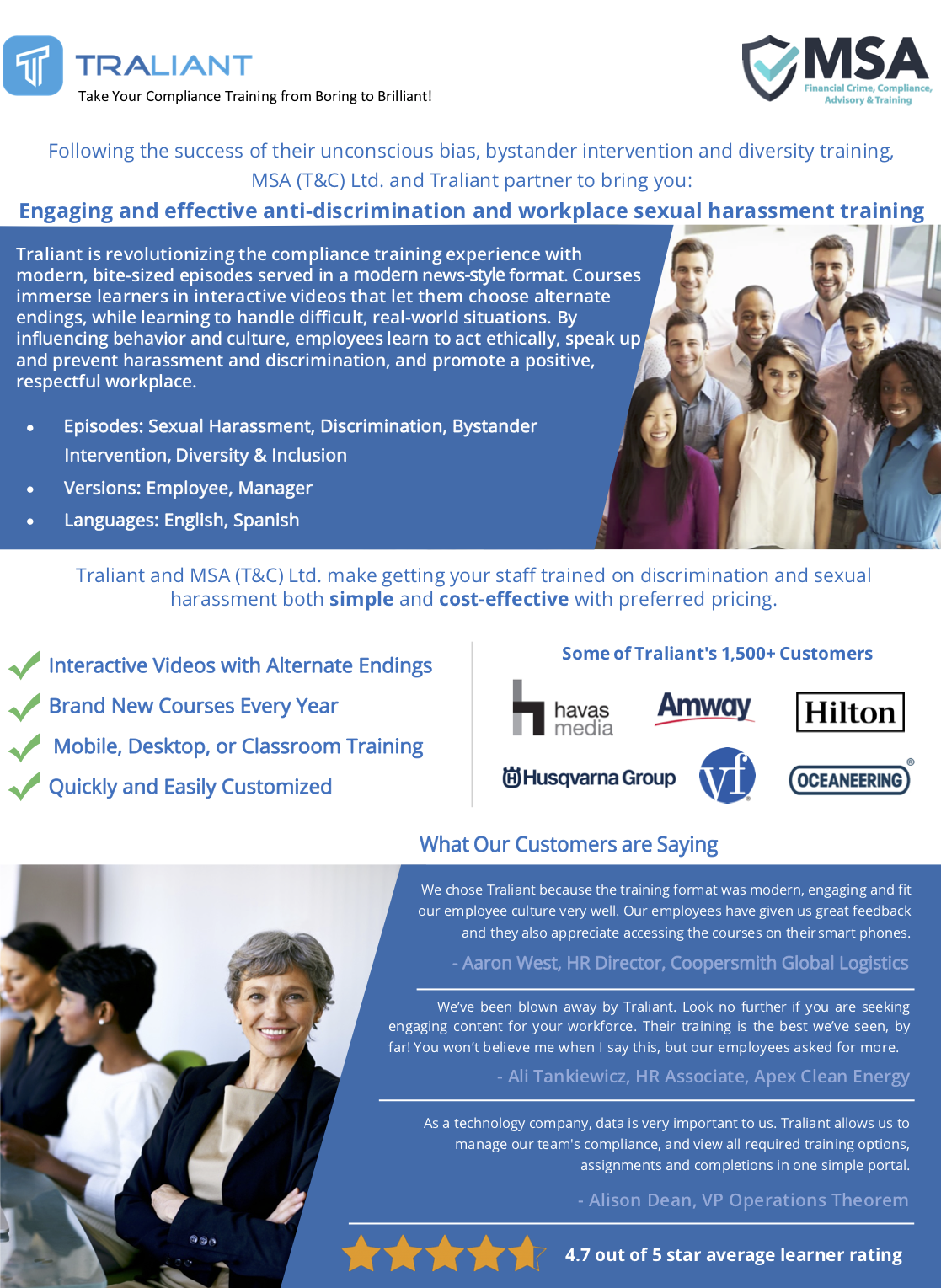